I give a high-level description and discussion of the projects in this portfolio that deal with the analysis of the EU industry production dataset, from finding the data to possible next steps.

In this report, I cover all the way from identifying a dataset on the EU countries’ industry production development in the EU Open Data Portal to interpreting the results that I extract. I connect the single projects that form the entire data science process and show the highlights and issues of the study.

For the storage and analysis of the labeled time-series dataset I use PostgreSQL and the Anaconda distribution of Python packages, including Jupyter Notebook for writing and executing the code.

The industry production index time series, covering the years 2000–2017, turns out to be mostly linearly increasing or decreasing on long time scales. A linear regression thus provides a good estimate of the slope for each country, which summarizes the growth dynamics in one number. In a ranking ordered by the slope, the countries are clustered conspicuously clearly by geographical position: Eastern European EU member states perform particularly well, Southern European countries particularly badly.

A next step could answer the question if the Eastern European countries are merely catching up by also taking the absolute production values into account.

The goal of this end-to-end project is to show how Python and SQL can be used to manage and analyze a time-series dataset, demonstrating how useful information can be uncovered from the data and how to learn along the way. In the following, I provide an overview of these activities — for more information on a single project / data science step, please follow the links at the end of each section.

To obtain the dataset to tackle, I make use of the EU Open Data Portal.

The EU Open Data Portal is a service that bundles access to online data repositories of EU institutions, e.g. the European statistics office Eurostat, and offices of the member states. The topics that are covered reach from economics and social questions to science and the environment.

The portal thus provides a good starting point for choosing datasets to work with.

I decide to work with a dataset that contains the industry production index, an economic indicator that can be used to compare the growth dynamics of the European countries.

More specifically, I select the industry production index for the manufacturing branch (in the EU classification system this is letter “C”, which does not include, among others, the mining and energy branches).

For reproducibility reasons, I choose to use the API (Application Programming Interface) to obtain the dataset. However, it turns out that it only provides a (rather cryptically structured) catalog of the metadata and download links that lead to files containing the full datasets.

The download process is complicated by a bug in the file decompression that is provided by the website. After overcoming this by using pandas for the decompression, I store the entire dataset in a local PostgreSQL database and then extract the manufacturing branch data.

Tidying up the dataframe

Next I scan the structure of the (sub-)dataset and identify the columns, rows and values in the online documentation. The latter fights fiercely for its secrets, but is forced to release them after some research.

With this new knowledge, I restructure the dataframe and index by time and country code. Furthermore, I clean the production index values by removing flag letters and turning them into proper float values.

Exploratory data analysis (EDA) on the cleaned dataframe with pandas statistical methods and matplotlib line plots reveals long-term growth for most of the countries, short-term fluctuations and additional mid-scale features like a dip in 2008 that coincides with the beginning of the financial crisis: 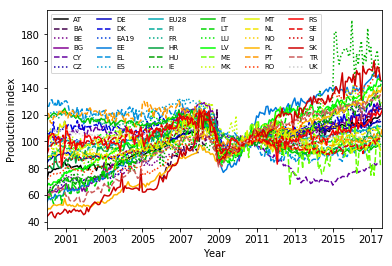 Note that data for the vast majority of countries is only available for 2000 and later, although the dataset begins in 1953. I thus concentrate in my study on the 21st century.

To get rid of the common trends and bring out the individual long-term of the countries, I divide each time series by the EU-averaged (EU28) time series: 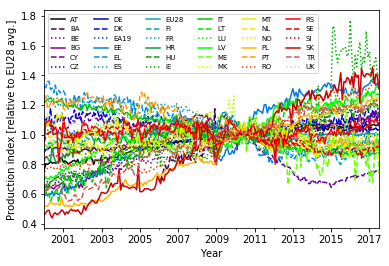 The normalized time series are roughly linear, which motivates to use linear regression to obtain the slopes of each country as a measure of growth. For illustrative purposes, I use the package scikit-learn for this task.

I extract the slopes both using linear regression and as a simple difference between the production index values at the end and the beginning of the time series. This provides a rough estimate of the robustness of the slope values. 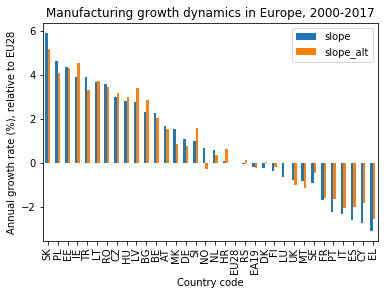 They are robust enough to allow distinguishing several groups. It turns out that geographical location is an important factor: 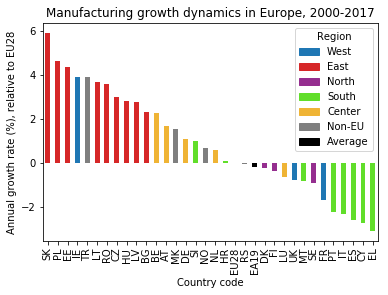 Since the dataset only contains relative numbers (index values with 2010 as the reference year) and I computed the slopes relative to the EU average, I cannot make statements about the absolute performance of the countries.

It is likely though that the fast growth rates of the Eastern European countries are part of a catch-up process that originated in the economic and political transformation 1989/90.

To understand if the fastest-growing countries are hurrying from the others or merely catching up, a comparison of the absolute production value would be a possible next step.

Since the data that I have analyzed so far is only relative (production index), this requires additional datasets, e.g., the “annual detailed enterprise statistics for industry” dataset, which is also availabe in the EU Open Data Portal.

Apart from this summary, I have made the Jupyter notebooks that contain the Python code used for the data analysis available on Github.

I have successfully obtained the EU industry production dataset from the EU Open Data Portal, downloaded and stored its contents, understood its structure, cleaned and reorganized the data, visualized and modeled it, extracted key insights, proposed next steps and documented the code I used.

The industry production index, as an indicator for economic development, showed a roughly linear increase for most countries in the years 2000–2017, briefly interrupted by a sudden dip in 2008 when the financial crisis emerged. It turned out that the industry production in the Eastern European member countries grew between 2 to 6 percent faster per year than the EU average, whereas most Southern European countries fell behind by 2 to 4 percent per year. Other EU countries grew similarly to the EU average, within a +/-2 percent corridor, except for the fast-growing industry in Ireland (4 percent above average). These results could be accompanied by the absolute industry production values as a possible next step.

Along the way, I gained experience working with Jupyter Notebook, found out about bugs in pandas, an arcane data documentation and other practical issues that I had to overcome.

I am a data scientist with a background in solar physics, with a long experience of turning complex data into valuable insights. Originally coming from Matlab, I now use the Python stack to solve problems.